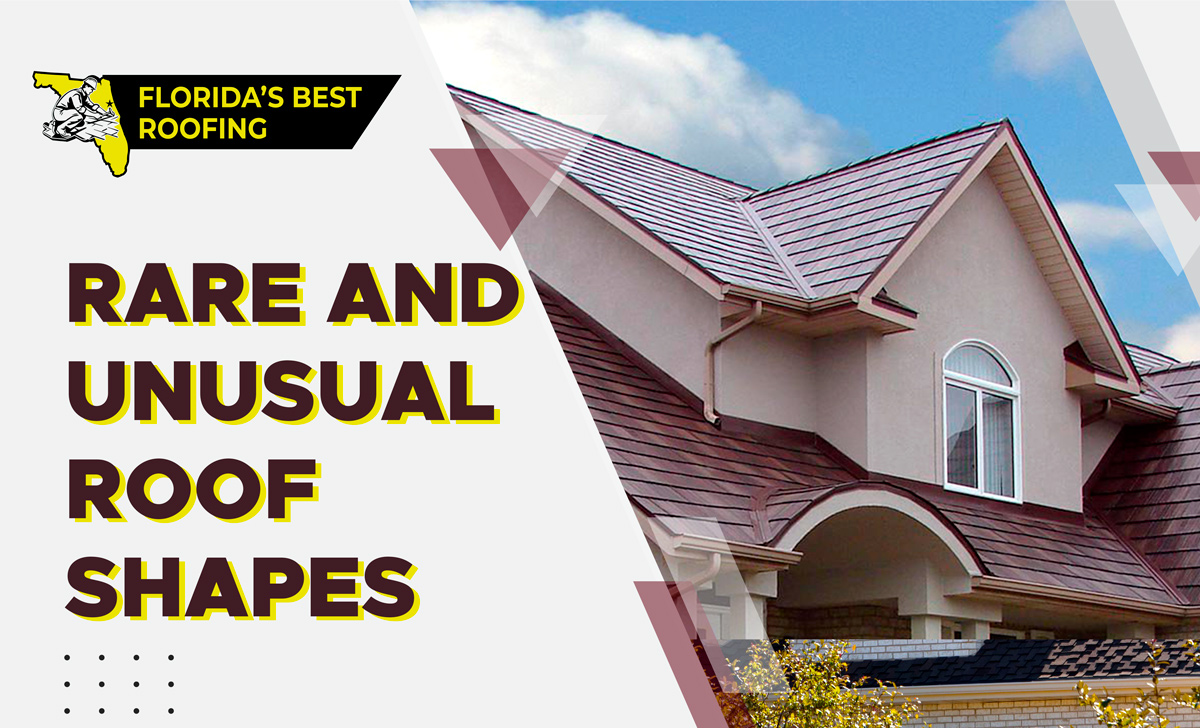 In our last post we discussed some of the most common roof shapes and styles in the United States (and really across the world). This time we will provide you with information on rare and unusual roof shapes. These shapes are all unique and most often chosen for aesthetic reasons, heightening the impact of a structure’s style. Due to their unique qualities, these types of roofs are often more expensive to repair and replace since they require contractors with very specialized knowledge and skills. Below we discuss nine of these roof shapes.

Bonnet: Bonnet roofs can be like either gambrel or mansard roofs (see our previous post for these), only in reverse. There are two panes on each side, with different slopes. Instead of the upper panes having a lower slope and the lower a steep slope, as is the case with gambrel and mansard roofs, bonnet roofs have steep upper panes and low sloped bottom panes. Bonnet roofs can have two sides (like a spruced-up gable roof) or four sides (like a hip roof). Bonnet style roofs are popular in particular geographic areas such as Cape Cod and other places in the Northeast, but fairly rare elsewhere.

Saltbox: Homes with saltbox roof styles gained popularity in colonial America, but examples can still be seen today across the country and elsewhere. Saltbox roofs have two sides, like a gable shape, but what makes them unique is that these sides are not equal or symmetrical. The two sides meet at the top ridge, but drop down unequal distances. In fact, one side is significantly shorter than the other, but equal in width. Most frequently, the slope also differs between the two sides. One side usually has a much steeper slope than the other side. Either the short or the long side may be steep.

Butterfly: A butterfly roof is a striking shape arising out of contemporary architecture. It is essentially the reverse of a gable roof, the result of which resembles the shape of the insect that lends its name to this roofing style. While two sides rise up to a ridge in a gable roof, the two sides of a butterfly roof actually slope down into a central valley. As you can imagine, this can easily lead to water retention issues and snow pile ups in colder environments, if special care is not taken to ensure positive drainage and snow is not regularly cleared.

Sawtooth: Sawtooth roofs are similar to butterfly roofs in that they have central valleys created by two sides sloping down. However, sawtooth roofs differ in that their valleys are created due to the repetition of components sloping up and then down, which results in a facade resembling the teeth of a saw. The repeating components can be straight or curved and can vary in slope–the only requirement is that they repeat exactly several times. This is a style most often seen in commercial roofing, and as with butterfly roofs, special care must be taken to ensure proper drainage.

Curved: Curved roofs provide a contemporary stylistic alternative to the straight lines seen in all traditional roofing styles. They give a structure a modern, sleek look, but require specialized skills and materials to install. Creating and designing such shapes requires experienced architects, structural engineers, and specialized contractors, which make them expensive to build and maintain, but the aesthetic possibilities are endless!

Pyramid: Almost five thousand years ago the ancient Egyptians figured out that the pyramid shape gives stability to structures of almost any size. The fruits of their labors are still standing today! The balance of weight and tension makes pyramid shapes and pyramid shaped roofs very strong. In this, pyramid roofs are closely related to hip roofs; in fact, they are a subset of hip roofs in which all four sides have equal dimensions and slope.

Jerkinhead: These are also called half-hip roofs. The origin of this terminology becomes clear with a quick glance (or in this case description) of the jerkinhead roof’s shape. The half-hip or jerkinhead roof has four sides. Two are just like those of a gable roof that meet at the top ridge. At both ends of the ridge you will then find a very short hip. This roof shape has the advantage of strength and stability provided by the hip elements and an old-world aesthetic.

Skillion: Skillion roofs are made of one sloped pane. The slope can be steep or low and the shape closely resembles a lean-to. This does not mean, however, that a skillion roof looks cheap or simple. Homes and other structures with skillion roofs often have two or more skillion roofs at varying elevations which give a very contemporary, modern, look and provide opportunities for more windows which allow for a brightly lit interior.

Dome: Dome roofs look exactly like you might imagine: essentially the roof is in the shape of half of a sphere. The force distribution in these roofs, if properly constructed, makes them incredibly strong and long-lasting. This is borne out by the fact that some dome-roofed structures, like the Pantheon in Rome, are still standing after thousands of years under the original roof! For a closer example, you might want to imagine the Capitol building in Washington D.C. Dome roofs are rarely seen in residential structures and require very specialized architects and structural engineers for their construction.

We hope this post has opened your eyes to the variety of shapes and styles that are out there in roofing. As always, for all your roofing needs in Flagler, Palm Coast, Bunnell, Daytona Beach, and Deland call Florida’s Best Roofing at 386-263-7906 for a free estimate!